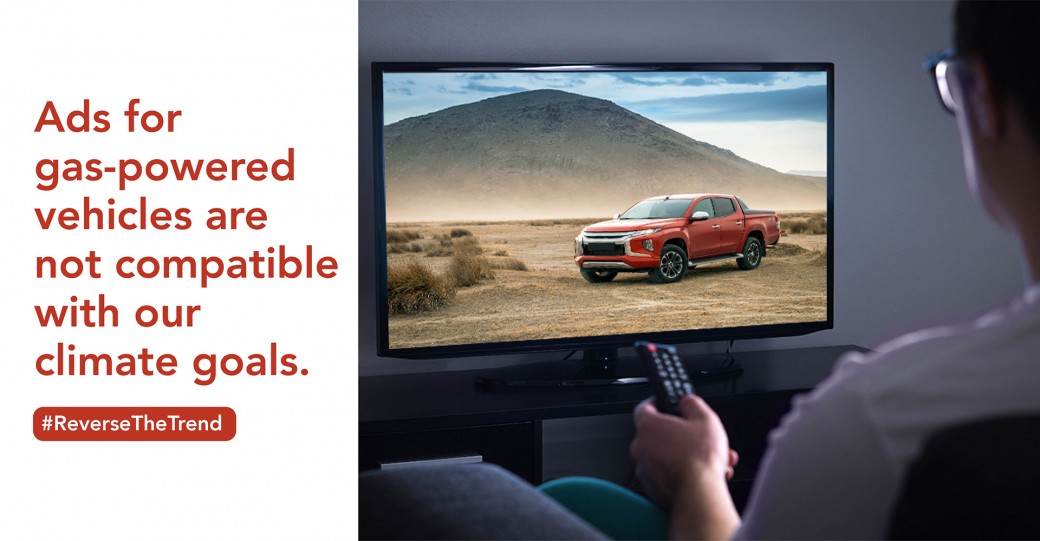 WE MUST TIGHTEN THE REGULATORY FRAMEWORK

ON ADS FOR GAS-POWERED CARS

We need to reverse the trend !

As the climate crisis looms as one of the greatest challenges facing humanity, we are being bombarded with ads encouraging us to buy gas-powered vehicles (gas or diesel), particularly SUVs and other light-duty trucks.

Advertising has a powerful impact on consumer choices

The link between advertising and purchasing behaviour is strong. A 2021 Équiterre study shows that nearly half of new vehicle buyers admit that their decision was influenced by some type of media.

Car advertising, including ads for light-duty trucks, is prevalent in Canada. The automotive industry alone accounted for 21% of total digital advertising investment in 2018, putting it at the top of the list

Gas-powered vehicles, particularly light-duty trucks, have significant multidimensional impacts and we must recognize their proliferation on our roads as a public health and safety issue. We need to increase advertising regulations in order to reduce the demand for gas-powered large vehicles.

Of the Government of Canada and the Canadian Broadcasting Corporation

Automotive advertising is getting in the way of our climate goals and our work to protect our environment. It is high time that we stop allowing this influence.

The environmental footprint of light trucks is tangible. Their negative impacts are direct and quantifiable, whether on the environment, road safety, public health, infrastructure, congestion or household finances. For example :

* The federal government announced in June of 20201 that in 14 years, or 2035, new passenger cars or light-duty trucks powered by combustion engines (gasoline or diesel) will no longer be sold in Canada. Therefore intermediate targets for 2025 and 2030 should be set to gradually reduce sales of new combustion engine vehicles before they are banned. On the other hand, we note that the advertising of these vehicles is pervasive and influences the behaviour of Canadians.

Source : Study "Understanding the rise of light trucks in Canada in order to reverse the trend" by Équiterre